Team RAFA is made up of young athletes from the town of Turrialba – Marcelo Omodeo, Sergio Jiménez, Enrique Segura, and Jose Contreras are the ones to be racing at WRC 2022.

Marlon Bustos started the team in 2016 and after his first race was noticed by Rafa Gallo for the great work he was doing with the team. Rafa quickly took these kids under his wing and helped them compete in a number of different competitions and probably the most important being their friendship competitions in Rafa’s Remando por la Paz – Rafting for Peace project in Colombia.

They developed a relationship with the former FARC soldiers at the Australian WRC in 2019. Mauricio Artiñano, a member of the UN and a Costa Rican attending the event to assist the former FARC soldiers noticed the bond and had the vision to see it grow. For the next three years Rafa and Mauricio took the Junior team to Colombia to be a part of the Rafting for Peace project.

Mauricio, who has become somewhat of a godfather for the team, will be going to WRC 2022 to cheer the team on, along with many of Rafa’s closest friends. Bringing it all together and its formed a family bond that rivers and paddles brought together, and Rafa was guiding the boat.

The name RAFA comes from the Rivers and Forest Alliance (RAFA) which was started by Rafa’s son Roberto Gallo to help keep conservation on top of everyone’s minds in and around the Pacuare River basin. The first ever carbon neutral world championship sporting event was held here in 2011, led by Rafa. Roberto and I had the idea that there is no better name for these kids to paddle under than Team RAFA.

Everyone in Team RAFA is from the town of Turrialba which is known for rafting and with either family or close friends in the rafting industry its something any kid looking for fun and adventure wants to get involved in around here. Their competitive side came from being selected for their discipline and certain characteristics that made them stand out from other young paddlers.

The team has raced at WRC 2018 in Argentina, WRC 2019 in Australia, twice in Colombia at their Friendship events, and numerous national events.

They train mostly at the Pejibaye River and its been going very well. They feel ready to compete. We all know that being a professional rafter in many countries the training is difficult, but they are up early and to bed late. They will soon be taking a week off from training as one of Rafa’s other visions is coming true. The arrival of the former FARC soldiers rafting team in Costa Rica. In return for all the hospitality Team RAFA received from the Colombians over the years, they are taking a week to show some of the rural tourism projects to their Colombian friends and of course spend some time on the rivers. It will be another gesture to Rafa that the team could not be more proud of. 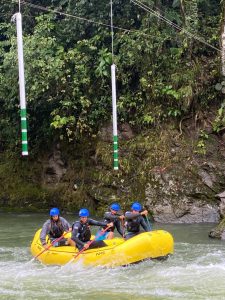 Besides competing at the WRC in Bosnia, the team is hoping to enjoy the weekend after the races to act as if they were characters in the Game of Thrones on the coast of Croatia with some of Rafa’s friends. But mostly they are looking forward to representing the legacy of Rafa Gallo and to be a part of something special to honor everything he has done for them.