The upcoming World Rafting Championships (WRC) which start on the 25 May, will see the California Poppies as the USA U19 Women’s team.

Teams from all over the world come to compete at the WRC, and while they may not understand each others’ languages, they all understand one common language – that of the river. Barriers drop away, friendships are made, competition is enjoyed, skills are learned, new rivers are enjoyed.

“You don’t speak the same language and now all of a sudden you do,” said head coach Sue Norman of the California Poppies.

Sue, a former member of the USA Women’s Rafting Team, has seen her fair share of international rafting competition podiums. Now at age 64, she’s looking to pass that experience to a group of young women who will be representing the USA at the WRC in Bosnia and Herzegovina. And while competition will be on the minds of many at the championships, Sue said it’s the bonds and memories formed at such international events that stand out after decades in the sport

“The reason to be there is to make friendships with the girls that we will be competing against,” said Sue. “Hopefully, lifelong connections and who knows where that will go. That was the experience I had, having this whole community of people that share this life that means so much to me. When I talk about that with these girls, I see their eyes light up.”

Sue grew up slalom kayaking, and raced on the US team for six years. In the 1980s, she joined a rafting team and competed internationally for roughly a decade. Five years ago, Sue moved to Truckee and began running a watershed education program on the Truckee River. She soon linked up with like-minded people and families from the area, and that’s when the idea to form a competitive rafting team began flowing through her mind.

“Truckee’s always had a vibrant rafting community,” said Sue. “I got to know a bunch of kids here because I ran a watershed education program on the Truckee River for a couple summers.  Seeing how dedicated these kids were, and how much they loved the river, I decided to put it out there and asked if these kids wanted to try competitive rafting.”

The team of six girls that emerged would become the California Poppies. 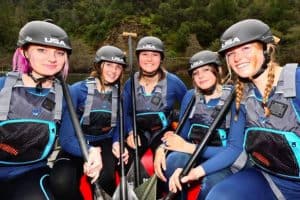 California Poppies – the USA U19 Women

The team’s first competition was nationals in Colorado in 2019. They finished as runner-ups in their division. Then COVID-19 hit and no events were available to race.

This did not dampen their spirits and a core group of six girls kept finding their way back to Sue for lessons.

“These girls have been training continuously with me and each year we hope there’s an event and each year with COVID they kept getting canceled, but the girls’ interest stayed with it,” said Sue. “They’ve grown up, gotten stronger, better, more solid, and now they finally have an event to go to.”

“All of the girls on the team are close, and so we always push each other to be better,” said Chloe Tippett, 15. “It’s a really tight group.”

Chloe has been on the river her entire life. Her father, Aaron Tippett, has been a longtime river guide, and will make the trip with the group to Bosnia to help judge in some of the events. Chloe has long excelled in kayaking, an individual sport, but surprised her family when she expressed interest in competitive whitewater rafting.

“Chloe’s been a really solid whitewater kayaker and when this came about she was like, ‘I wanna try this,’” said Aaron Tippett. “It’s just really neat to see a person who is very independent in her kayaking move to a team sport.”

Joining Chloe on the team is Laurel Anderson who began rafting as a toddler and is a founding member and co-vice president of the U.S. Rafting Association Youth Board.

“I would like to compete internationally because it would be an incredible opportunity to compete at a higher level in a sport I love and meet others around the world in the sport,” said Laurel about the WRC.

Hannah Hammond grew up rafting, while also excelling as a cross-country skier. Sienne Elste is usually part of the team but will miss the competition in BiH due to a family rafting trip in the Grand Canyon. Tatum Akers has been rafting since age 4, while also excelling on the slopes as an alpine skier. She has been the top Far West U16 skier the past two years.

“I love being a strong female in challenging sports and I look forward to being able to represent California and the United States on a female whitewater raft team,” said Tatum on competing in Bosnia.

The final member of the team is Kennedy Kruse. She grew up paddling with her father and brother and has since spent time attending guide school, helping teach children about paddling, river safety, navigation, and ecology.

“I love learning about whitewater sports and I’m dedicated to doing my best, because whitewater is my passion,” said Kennedy, 18. 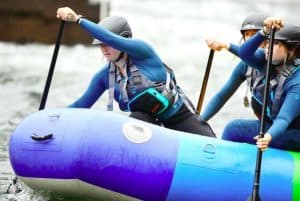 While many of the group’s individual backgrounds differ, it’s ultimately a love for the river that unites them as a team, something their coach said immediately stood out.

Sue said the hope is the competition can bring countries together, something that happened during the first WRC. That event, which Sue took part in, took place in 1989 in Siberia and was organized by a group of rafters from Russia and California. It eventually led to the formation of the IRF in 1997 and so peace has always been a part of raft racing and of the IRF.

“I’ve really been thinking about that contrast,” said Sue. “My experience going into this (in 1989) was an amazing time as far as world peace and all this openness because the Iron Curtain had just come down. There was this very strong partnership between these Russian and Californian rafters that really spread into this larger thing. Now, these girls, their first competition is happening when it looks like the Iron Curtain is going back up. We feel sad for not only the rafters in Ukraine, but also the rafters in Russia.”

In order to reach this year’s WRC, the team is raising funds tax free through the U.S. Rafting Association.

Follow USA U19 Women on their social media links: